PROJECTS & ACTIVITIES AROUND THE MPA

Published in 2018, the purpose of the Biosecurity Plan is to establish a guiding framework to reduce the risk of the introduction of new non-native species (NNS) to the Tamar Estuaries area and to effectively manage existing NNS including invasive non-native species (INNS). This will be achieved through the voluntary collaborative effort of all organisations and interested parties within the area. The Biosecurity Plan describes the marine biosecurity issues identified within the Tamar Estuaries area and presents actions that have been agreed with stakeholders, through a series of workshops,  for the prevention, early detection, control and mitigation of the introduction and spread of NNS.

The successful adoption of recommendations in the Biosecurity Plan is expected to bring about the following socio-economic and environmental benefits:

● Identifying the Tamar Estuaries area as an area which is proactively managed by its stakeholders to ensure the maintenance and enhancement of biodiversity.

● The maintenance of the aesthetic character and utility of areas of the Tamar Estuaries.

● The reduction of risk regarding the establishment and spread of NNS including slowing of the introduction of NNS to other parts of the UK via the Tamar Estuaries area acting as a potential ‘gateway’ for marine NNS into the UK.

● Enabling stakeholders to take ownership of the problem and its solutions.

For more information about NNS & INNS in the MPA, visit the Protecting our Marine Environment page.

Phase one of the Marine Recreational Impacts Project was launched in April 2017, in order to meet statutory management commitments related to the Habitat Regulations Assessment (HRA). Under the HRA, the four Local Planning Authorities (LPAs) bordering the Marine Protected Area (MPA) – Plymouth City Council, South Hams District Council, West Devon Borough Council, Cornwall Council – are required to charge levies on new housing developments to fund management of the impacts of recreational activities on the MPA, which are expected to increase as a result of population growth.

As a popular destination for a wide range of water-based activities, including sailing, angling, diving, paddle sports and motor boating, the Plymouth Sound & Tamar Estuaries MPA is very susceptible to the impacts of recreational activity.

The main objectives of the project are:

● Develop and deliver strategies to mitigate impacts of high-risk recreational activities on the special features and species of the MPA.

● Raise awareness of the impacts of recreation on the MPA and improve education about how recreational users can minimise those impacts.

● Engage with water users and stakeholders to devise a strategy for sustainable management of the MPA.

View the EMS Recreation Study Document 01: A brief investigation into the possible interaction and sensitivity of priority species and habitats to recreational activity within the Tamar Estuaries Management Plan area. MBA. 2016.

View the EMS Recreation Study Document 03. Survey of recreational use within the Plymouth Sound and Estuaries European Marine Site. MBA 2017.

The Plymouth Sound is a very popular site for recreational boaters, but we also have important areas of subtidal seagrass that overlap with anchoring and mooring locations. Research has shown that the effects of anchoring and mooring can be devastating to seagrass beds as a result of scour from the chain and anchoring dragging up the seabed.

TECF contributed funding to install a trial eco-mooring solution developed by the Community Seagrass Initiative (CSI) as part of a wider trial in multiple locations in the South West. Installed in July 2016 in Cawsand Bay, CSI have conducted regular monitoring of the seagrass around the mooring to establish if the solution has helped to minimise the impacts of standard moorings and assess any improvements in habitat condition.

Habitat mapping and monitoring of allis shad on the River Tamar

The Tamar is the only place in the UK where this elusive member of the herring family is known to breed. Like salmon and sea trout the allis shad migrates between the sea and the rivers, returning to its river of birth to breed. Once heavily exploited and widely eaten in Britain, the species is now at risk throughout its range and locally extinct from many rivers where it once flourished and supported a fishery.

Today the biggest threats to the species and their close cousins the “twaite shad” are barriers to migration such as weirs and dams which prevent them reaching their freshwater breeding grounds. Pollution of rivers has also had a major impact on shad populations throughout Europe.

The study, which took place over the summer spawning period of 2019 was carried out by Rob Hillman of the Environment Agency who has studied the Tamar population for over a decade. In this study he surveyed the eggs which settle to the riverbed and develop in clean gravelly areas in the upper estuary. Rob said “I’ve studied the Tamar population since 2000 and this study has confirmed that although allis shad occasionally spawn in the river, spawning is generally limited to the upper estuary below Gunnislake Weir- a situation unique to the Tamar among Atlantic allis shad populations.’’

Allis shad migrate to their spawning grounds under very specific conditions, synchronising with others of their species to spawn in river pools under cover of darkness. During the survey eggs were observed at various stages of development, including eggs with the eyes of the tiny fish visible through the egg sac. 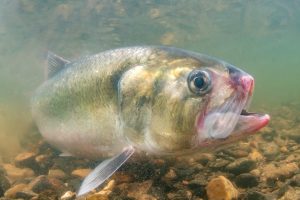 Little is known about the behaviour and distribution of the allis shad once they leave the estuary but it is hoped that one day members of the small, vulnerable Tamar population can be tagged to reveal their movements at sea.

During the study, the secretive fish was captured on film in the wild for the first time in the UK. Rob Hillman worked with professional videographer Jack Perks, who specialises in filming freshwater fish, in order to capture footage of the Tamar allis shad as they migrated upriver towards their spawning grounds.

View the video of allis shad in the wild.

Angela Gall from Natural England, who commissioned and funded the work said “Allis shad are protected within the Plymouth Sound and Estuaries Special Area of Conservation but we know so little about their lives. This work, demonstrating the importance of a tiny area near Gunnislake, goes a long way towards helping us to better protect the species and ultimately to help populations to recover and thrive”.

The waters of Plymouth Sound and Tamar Estuaries are protected and are collectively managed through the Tamar Estuaries Consultative Forum which brings together the key organisations including local authorities, harbour authorities and other statutory organisations. Cdr Carl Necker, Queens Harbour Master and Chair of TECF said “this work is incredibly important and highlights just how vital our waters are for wildlife as well as for economic and social reasons. The collaborative processes at place in Plymouth are indicative of the close working relationships that have been developed over the past two decades and demonstrate how environmental, commercial, military and broader stakeholders can function amicably alongside one another”.

View the Habitat mapping and monitoring of allis shad of the River Tamar study.

RESEARCH & MONITORING AROUND THE MPA

It is the responsibility of Natural England to formally monitor the condition of the Marine Protected Area and they report to Government on the state of all the designated marine sites every six years. However, in order to inform the on-going management of the waters, high quality research and monitoring are vital to help inform decision-making.

The Inshore Fisheries and Conservation Authorities (IFCAs) have a responsibility to manage sea fisheries resources under the Marine and Coastal Access Act 2009 (MaCCA) which includes crab tiling. The Tamar Estuary falls within the jurisdiction of both Cornwall IFCA and Devon & Severn IFCA (D&S IFCA). Currently no statutory or voluntary measures have been implemented to restrict or regulate crab tiling on the Tamar Estuary.

Every four years, surveys are carried out to determine the number and location of crab tiles on the intertidal zone of the estuaries. The most recent surveys were conducted in 2016 (Devon & Severn) and 2017 (Cornwall. The surveys enable Cornwall and D&S IFCA to assess any potential impacts of crab tiling on sensitive estuary environments, and to inform the development of appropriate management.

In 2016, Tamar Estuaries Consultative Forum (TECF) commissioned the Marine Biological Association of the UK (MBA) to conduct an assessment of recreational activities within the Plymouth Sound and Tamar Estuaries Marine Protected Area (MPA).

The project was delivered in two stages. Firstly, the scoping project aimed to determine which conservation features have possible interactions with recreational activity across the MPA, and the sensitivity of those features to the activity acting upon them. Secondly, a survey of the distribution and frequency of recreational activities in the MPA was conducted via on-site surveys, workshops and online surveys.

Among other things, the study is helping TECF to manage the impact of recreational activities on the MPA by identifying popular activities and how they overlap with protected features of the marine site. You can find out more about the Managing Marine Recreational Impacts Project on the Projects tab.

Public slipways are very important as they allow access to tidal waters and vital to everyone who wishes to get on or in the water and even to simply be beside the tidal waters of Plymouth Sound and the Tamar Estuaries. This document provides a record of the key slipways and also audits the public slipways in terms of access, condition, usability and overall assessment.

TECF occasionally submits responses on behalf of all the members to consultations which impact on the management of the estuary as a whole. This is the TECF response to the 2013 DEFRA consultation on Marine Conservation Zones (MCZ).

On the 29 November 2013 over 30 people scientists and professionals attended a workshop held at the Marine Biological Association in Plymouth in order to discuss how best to monitor the Marine Protected Area. The following documents all relate to the workshop.